Sorry to hear that people are so riled up again about you. While you continue to have numerous supporters in and outside the church, these folks don’t seem happy at all, let me tell you.

They say you are misguided, that you are off your rocker. It appears a good number of people in the church think you’re intent on dragging us down with this outdated Honor Code thing at Brigham Young University-Idaho. They’re calling it mindless obedience, a well-orchestrated plan to turn us into Amish or something you dreamed up because you must be bored.

By now, you know I am referring to this post on the President of BYU-Idaho Facebook page from a few days ago. Here it is again for those who missed it. 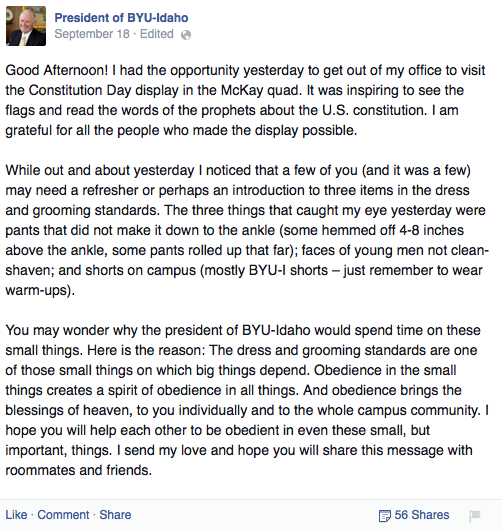 Here’s one example of the many of the negative responses I found about you in about 10 minutes of searching. I didn’t spend any more time because wallowing in the mud makes it tougher to get cleaned up for church.

Surprisingly, a good number seem to be from members of the church.

The ones who raised their arms to the square and sustained Gordon B. Hinckley as prophet, seer and revelator. I only mention him because he was the one who asked you to move to Rexburg and lead BYU-Idaho. It’s as if by implication that the prophet sure messed up on this decision.

Speaking of mocking and criticism, when did it become OK for members of Christ’s church do murmur, complain and criticize about you, your policies, BYU-Idaho and what took Chick-fil-A so long to get on campus.

You’re probably the first to admit that not every decision of yours has been a good one. Even as a church institution, BYU-Idaho has problems and challenges to resolve. Still it doesn’t mean that detractors get to stand you up against the wall and make you duck a barrage of verbal dodge balls.

Maybe we should remind folks what Elder Dallin H. Oaks said about criticizing church authorities. In a 1986 address to the Latter-day Student Association in the Salt Lake Tabernacle, he said:

“Criticism is particularly objectionable when it is directed toward Church authorities, general or local. Jude condemns those who ‘speak evil of dignities.’ (Jude 1:8.) Evil speaking of the Lord’s anointed is in a class by itself. It is one thing to depreciate a person who exercises corporate power or even government power. It is quite another thing to criticize or depreciate a person for the performance of an office to which he or she has been called of God. It does not matter that the criticism is true.”

But Pres. Clark isn’t a bishop or a stake president, so this doesn’t apply, somebody will insist. Maybe they forgot that you served as an Area Seventy for the church until you were released in May. And if Pres. Hinckley asked you to be the next president of BYU-Idaho, that’s good enough for me. I guarantee plenty of prayer and fasting went into that decision.

I’m sure you agree with Elder Oaks that Latter-day Saints don’t need to be docile or indifferent to defective policies, deficient practices, or wrongful conduct in government or in private organizations in which we have an interest. But we got to build people up and not be so quick to tear down. Whether they are the former dean of Harvard Business School or work at a local convenience store.

President David O. McKay said this about what he called “murmurers” and “faultfinders”:

“Speak not against the authorities.’ What does it mean? Be not a murmurer; that is what it means. It is one of the most poisonous things that can be introduced into the home of a Latter-day Saint—this murmuring against presidents of stakes, high councilors, Sunday School superintendents, etc. …

“Better stop murmuring and build. Remember that one of the worst means of tearing down an individual is slander. It is one of the most poisonous weapons that the evil one uses. Backbiting and evil speaking throw us into the class of malefactors rather than the class of benefactors.” (Gospel Ideals, Salt Lake City: Improvement Era, 1953, pp. 142–43.)

Oh and about the dress code. I chuckle when I see the people who say obedience in small matters doesn’t lead to bigger blessings. Only because it seems so Naman of them.

I know you’re not concerned about what people think, that they’ve pegged you as a Pharisee or wouldn’t allow the Savior on campus because of his beard or sandals. But it must be comforting to be on solid gospel footing after hearing these words from Pres. Hinckley about the Honor Code at BYU in Provo. Yes, we know the Honor Codes differ some between the two schools. That’s not even the point, according to Pres. Hinckley, who gave this address at BYU while first counselor to Pres. Hunter in 1994.

“I recognize that some have strong feelings concerning standards of dress and conduct. I can only say that in every game we play, we play by the rules. I hope you will not look upon the Dress and Grooming Standards as repressive. They have been designed with another objective in mind. Our leaders have taught through the generations that “cleanliness is . . . next to godliness” (John Wesley, Sermon 93, On Dress, c. 1780). Neatness in dress, modesty in dress, cleanliness in person—are these too much to ask of a student body of this kind of young men and women who carry in their hearts a conviction that you are indeed sons and daughters of God, our Eternal Father?”

It sounds to me like the Honor Code gets us ready to enter the temple where everybody wears white. When you consider how the temple prepares us for exaltation, the dress code doesn’t seem so much about what you wear but who you are and what you can become.

I’m not sure if you noticed or not, but I used your full name in my blog post title.

6 Replies to “A letter to BYU-Idaho Pres. Kim B. Clark”