Both about little ol’ me.

The latest one is in today’s Standard Journal by Managing Editor Greg Little. He appears to be offended by my opinions expressed on Facebook about how they covered a news story. I am not mentioned by name, it’s very obvious who they are referring to.

For a guy who’s leaving town with his family, heading for a new job and a new beginning, they sure seem fascinated by what I have to say. If I am so incompetent as they allege, why do my words matter?

But I don’t have time for that. Instead I’ll let Rexburg Mayor Richard Woodland speak for me. This is an excerpt from a mailing that was sent out to all media organizations and will go out with utility bills to everyone:

We seem to face a time within the City of Rexburg and Madison County where nay saying has become a popular sport or tool of a radical fringe that seems to be encouraged by an out of state newspaper. The Rexburg Standard Journal was at one time a locally owned and valuable asset to this community, however the current out of state owners have assumed  that “ginned up” controversies might sell more newspapers. Instead of being a builder it has become an adversary to the good people of this community. There has been such a diatribe against local officials that make them wonder why they bother to serve. Yet they do so, because they are builders. The naysayers are not builders! Some of them have been defeated in their attempts at becoming elected. They will not endure! Their names will be forgotten! Only the names of builders are remembered.

Trust me, mayor. I know how you feel.

I will be fine. My family and I are excited for what the future brings and grateful for the many friends we have made here in Rexburg. I can’t help but worry about the future of the Standard Journal. When a community newspaper loses the support of much of the community, they have more to be concerned about than whatever I have to say. 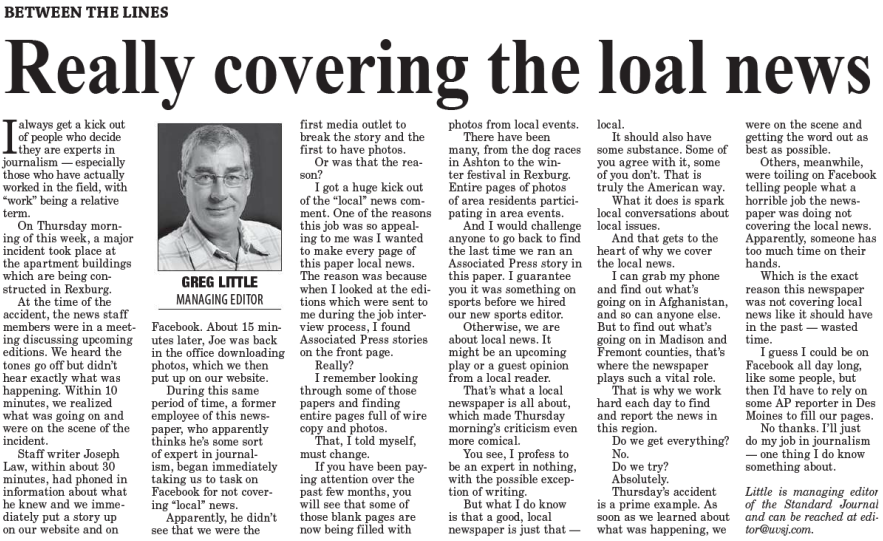 2 Replies to “Newspaper has bigger worries besides me”