Somebody called you names again, and now you’re hurt a little bit.

That Dallas reverend said you belong to a cult, and it made you mad. For several days, national news outlets have carried the comments made by the Rev. Robert Jeffress and the resulting backlash.

You wondered how this could come up again, despite repeated attempts to explain the word “cult” really doesn’t mean anything in this sense. Except that it’s a downer word met to hurt and downgrade.

All because the Church of Jesus Christ of Latter-day Saints doesn’t believe all the same things as other religions. While we share many of the same core beliefs as other religions, the differences still make people from some other faiths uncomfortable at times.

Some of you said the public relations arm of the Mormon church should rise up an repudiate the statements, show some pictures of Jesus Christ and denounce Jeffress.

Not necessary. Plenty of other people did that for us. CNN’s Anderson Cooper, not a known supporter, ate Jeffries for lunch during a now famous interview shared widely around the Internet.

In this column by Dean Obeidallah, he concludes with the following:

“But I can now say without hesitation that the LDS Church members we met represented the best of Christianity. They were truly caring and compassionate people.”

You all passed around the wonderfully written column by Michael Ottersen and said, “See, see, we are Christians.”

Perhaps my favorite so far is this column from the St. Petersburg Times, comparing Jeffress and LDS church apostle Russell M. Nelson. Daniel Ruth asks who he would be more comfortable with seeking guidance from: Jeffress or Nelson?

Whom would I be more comfortable with?

Would it be the bloviating little God-baiting parson in Dallas who is so quick to condemn, to judge, to exploit the worst ignorant fears in people?

Or would it be the octogenarian gentle man, who may hold dogmatic beliefs I don’t subscribe to, but nevertheless yearns to simply lead a meaningful life.

I think I would be on the next plane to Salt Lake City.

And the response from the LDS Church newsroom? A very short post included these final words:

Members of The Church of Jesus Christ of Latter-day Saints believe in, study and seek to live by the teachings found in the Old and New Testaments. We also believe the Book of Mormon is another testament of Jesus Christ. As the verse above plainly teaches, Christ is at the center of our worship, study, service and faith, and we believe this is clearly demonstrated in the lives of more than 14 million members in over 130 countries around the globe.

Some good members have even taken to changing your Facebook profile pictures to the one below. It includes the name of the LDS churchm the words, “I’m a Christian” and invitation to learn more here. 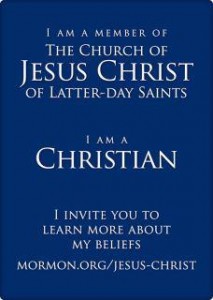 I have no problem with good people who have done this. We’re encouraged to share the source of our happiness and why we believe in Christ. Needless to say, these exceptional peopl are much better missionaries and better representatives of the church than I am.

Still, I don’t think a sign, virtual or otherwise, should be necessary to show people I’m Christian. If I wouldn’t wear a placard with the Savior on it around town, I probably wouldn’t post it as a Facebook profile picture.

If I’m doing it right, you’ll know I’m Christian by the way I treat others, by what you see me reading and how I treat my family.

You’ll know by my how I react to my mistakes and the words that come out of my mouth.

If somebody tosses out poisonous rhetoric, I might smile and move on, doing the best I can each day.

As near as I can figure out, that’s what Christians do.